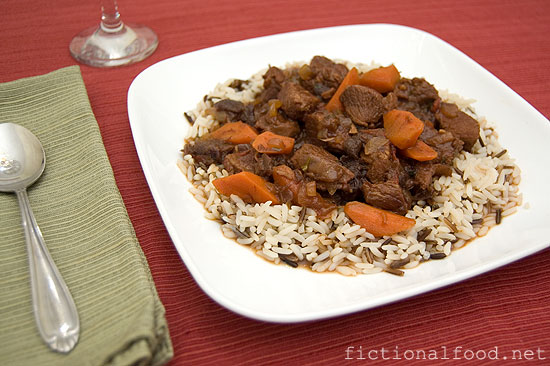 I wasn’t going to post this, but after a little Facebook chat with Savanna New of Picktainment and some prodding from her during The Hunger Games Fireside Chat #14, I feel guilty enough to post this disgusting culinary failure of mine. Being a big fan of The Hunger Games, I’ve had lamb stew with dried plums on my to-do list for months. I’d looked and looked at recipes online and eventually chose this one at Food.com, largely based on the reviews it got.

Sure, I bought a huge 4 pound lamb leg, plated it as nice as I could, and bought wild rice just to serve it on but holy cow was it the most awful thing I’ve ever cooked in my life! I was actually pretty shocked that Baby Girl ate a few pieces of the meat before telling me it “tasted funny”. I had to force myself to eat it and hubby apologetically told me that if there was anything else to eat, could he please have it?

It could be that my red wine just wasn’t good anymore, but I’m pretty sure it was the spice combination that killed it for me. It was like tossing together beef stew and pumpkin pie with wine poured in. We fed the rest to the dog and he later threw it all up under the avocado tree. Thanks Max.

For years, my mom had turned me off of lamb, telling me she can’t stand the stuff because of the smell. Thanks to her I went 32 years without eating lamb and this wasn’t exactly the best introduction to it. Next, I’ll try adapting a recipe I saw on AllRecipes, which has been my most reliable and favorite recipe site since college. I should never have strayed! That’s what I get for being disloyal!