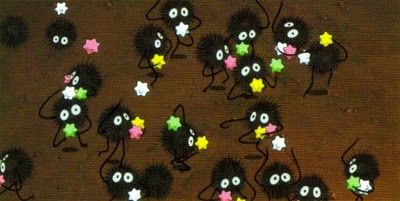 Ten years ago, when Studio Ghibli translated and released Spirited Away

, I was one of many that simply watched in awe as cuteness presented itself scene after scene. I loved so many parts about this movie (though the whole gorging scene was really strange), but my favorite, which I’m sure is the favorite of many, is the scene in which Lin comes into Kamaji’s room and feeds the little sootballs that have been laboring so tirelessly.

I couldn’t find any videos of this scene anywhere online, but you can see a few short seconds of it at around 1:58 of this video:

A-freaking-dorable, right? So for the last ten years, that scene has really stuck with me. I even made a soot ball bento in 2007. Still, I’d always thought that the little stars they snatch up and eat were made up. A cute little fabrication among many other cute fabrications in the movie. Then last week I was at Longs buying some paper goods for a work party when I saw a bag of a candy called ‘Konpeito’.

I couldn’t believe it! The candy was real! I don’t know why it never occurred to me before. Now that I had a name for it, I went searching and found that both J-Box and Asian Food Grocer sell this online. According to the descriptions on the sites, this candy is originally from Portugal and has been a favorite in Japan for over 400 years! 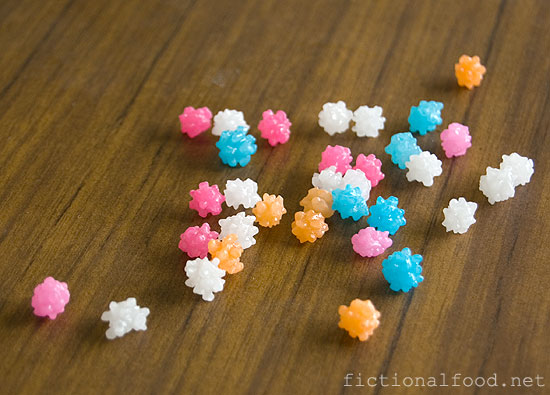 It’s an adorable candy and very simple. It’s basically just colored sugar shaped to look like little rocks. I let my daughter eat these after I took the photo and she came asking for the bag so she could eat more later. Sugar addict… 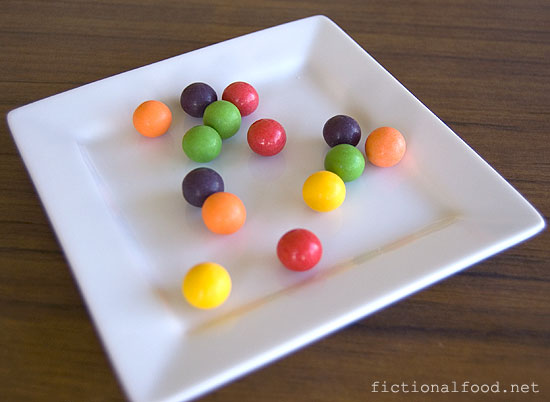