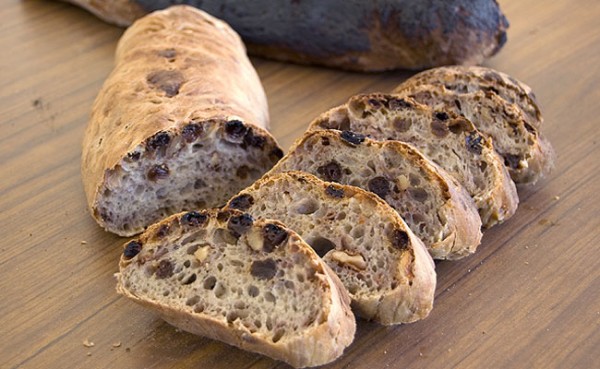 I stared at the loaves in disbelief. They were fine, perfect really, except for the burned areas. Did he mean for me to have them? He must have. Because there they were at my feet. Before anyone could witness what had happened I shoved the loaves up under my shirt, wrapped the hunting jacket tightly about me, and walked swiftly away. The heat of the bread burned into my skin, but I clutched it tighter, clinging to life.

By the time I reached home, the loaves had cooled somewhat, but the insides were still warm. When I dropped them on the table, Prim’s hands reached to tear off a chunk, but I made her sit, forced my mother to join us at the table, and poured warm tea. I scraped off the black stuff and sliced the bread. We ate an entire loaf, slice by slice. It was good hearty bread, filled with raisins and nuts.

If there’s any food that people think of when you say “The Hunger Games” besides lamb stew, it’s the bread that Peeta burns and then tosses to Katniss out in the rain. It’s the bread that saves her life and the life of her family and therefore represents everything that Katniss owes Peeta. We all know Katniss hates owing anyone anything and she can never really pay Peeta back for this.

I searched the net casually for a few days before I came across this recipe from shutterbean. It looked and sounded just like what I needed and the best part was that it sounded easy too. After a quick poll on Twitter, the general consensus was that bread baked on a stone was superior to cookie sheet bread. My first loaf of bread was rather hard and baked on a cookie sheet, so I decided to invest in a stone and took a trip to Williams-Sonoma. I had a $100 gift card for the mall, so I used that and brought home a really snazzy looking stone. 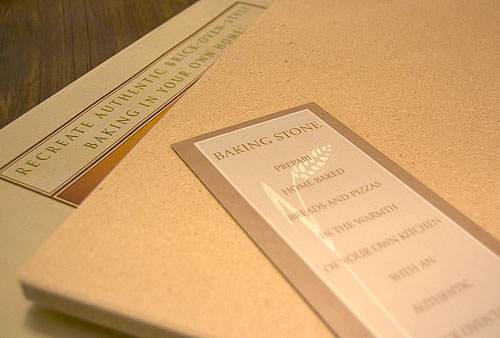 Oh yes, there will be bread!

After holding out my hands and estimating that a 10″ loaf was too small for two large loaves of bread, I upped the recipe by 1/2, which turned out to be perfect! I mixed up the ingredients with the help of my 5 year old son and then we left it out on the dining table, covered with plastic wrap, until morning. At about 13 hours, I separated the dough into two pieces and then floured them up, letting them rise again in some towels for a couple hours.

I have to say, this was the first time I’d heated my oven this hot and it was crazy. My stovetop had a bit of water on it and it started steaming and evaporating. I had the stone in there as it heated up and had put flour on it, but apparently didn’t put enough all over because the bread totally stuck to the stone and I had to cut it off with a knife and spatula. I baked it for a total of 45 minutes. 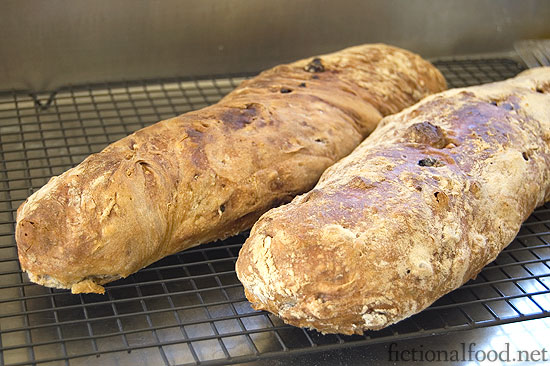 Here are the loaves fresh out of the oven. They’re a little funny shaped, but still not too bad for being my second and third attempts at baking my own bread ever! You know what comes next right?

TIME TO BURN SOME BREAD, BABY! 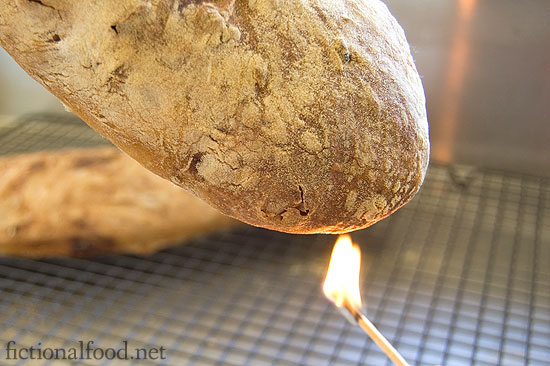 I’m totally joking, hahahahaha! I went outside and started a fire in my little Weber. I’m actually quite proud of myself because last week I’d bought a coconut and spent 15 minutes husking it and sweating like crazy. And then the coconut was rotten. OMGRAGE!! Anyway, I kept the husks in a pile to dry and of course the dog flung it all over the yard. I gathered it all up and using matches and some pieces of untreated wood from Mr. Pikko’s woodwork I started a fire.

It took me a bit and I’m sure I’m a little brain damaged from all the damn smoke and because I forgot that I should be adding more tinder after it started burning, it took longer than it should have. You would think that after watching 23 seasons of Survivor I’d have remembered this right off. Eventually, the wood caught fire and I got open flames to use. I was afraid that the neighbors would come out into their back yards and see me holding loaves of bread over the fire and think I’m psycho, but thankfully no one did. 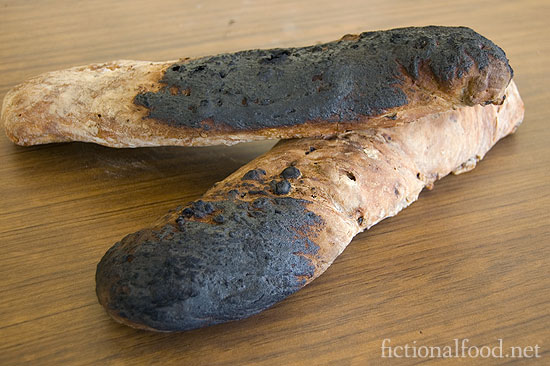 Here’s my results. I tried to imagine how it would fall in and decided they’d fall in vertically while still hanging off the baking surface of the oven, causing only the ends to be burned. I burned one more than the other since one would continue burning as the first was rescued. 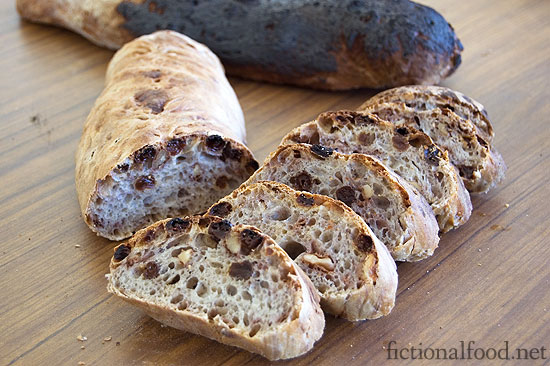 I took a knife and scraped the black stuff off, which was awful because I had black soot flying all over my kitchen and into my nose, but it did look fine. Me and hubby actually hate raisins in bread and my daughter can’t eat nuts, so I have to give the good halves away and feed the rest to me and my son.

Even though I don’t like raisin bread, I was very happy with this recipe. It really is a “good hearty bread” just like Katniss describes and so I’m very satisfied with the results. I can’t taste the raisins too much and I really can’t believe I baked bread that looks this pretty inside. If you make this for a Hunger Games themed party, please be careful with the fire! 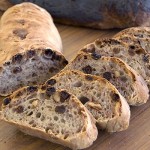 Katniss is on the brink of dying of starvation when Peeta Mellark, the boy with the bread, tosses her two loaves he burnt on purpose to give to her.