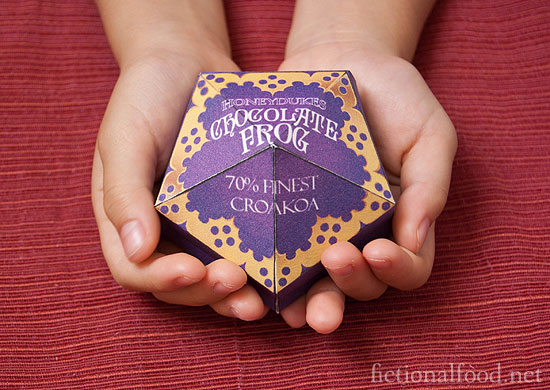 Ron had taken out a lumpy package and unwrapped it. There were four sandwiches inside. He pulled one of them apart and said, “She always forgets I don’t like corned beef.”

“Go on, have a pasty,” said Harry, who had never had anything to share before or, indeed, anyone to share it with. It was a nice feeling, sitting there with Ron, eating their way through all Harry’s pasties, cakes, and candies (the sandwiches lay forgotten).

“What are these.” Harry asked Ron, holding up a pack of Chocolate Frogs.

“They’re not really frogs, are they.” He was starting to feel that nothing would surprise him.

“Oh, of course, you wouldn’t know — Chocolate Frogs have cards, inside them, you know, to collect — famous witches and wizards. I’ve got about five hundred, but I haven’t got Agrippa or Ptolemy.” Harry unwrapped his Chocolate Frog and picked up the card. It showed a man’s face. He wore half- moon glasses, had a long, crooked nose, and flowing silver hair, beard, and mustache. Underneath the picture was the name Albus Dumbledore.

I mentioned my initial experience with Harry Potter when I did my Bertie Botts post and now I’ve got another one of those memorable confectionery treats that Harry is exposed to on the train when the lady with the snack cart stops by their compartment: chocolate frogs!

Chocolate frogs aren’t just any old magical candy though, they help Harry, Ron, and Hermione solve the mystery of the first book!

You can buy these from the Universal Honeydukes gift shop of course… if you’re rich, that is! Yes, they sell these wonderful “real” deals for only 4 for 50 bucks. Yeesh. This middle class cook will make her own, thank you very much.

I’m not sure who gave it to me, but I had this chocolate frog mold

handy for my work. It’s a clear plastic mold for a variety of uses, but mine will be to make little ribbity balls of chocolate.

I bought a bag of milk chocolate chips and melted them in my double boiler, nearly burning them because I sat down to check email for “just a second”. I spooned them out into the mold and let them sit there. Since I live in Hawaii, they never really firmed up, so I got impatient and stuck them in the fridge.

I found that as it firmed up properly, the “skin” of the frog would separate from the mold. When the chocolate was no longer touching any part of the mold directly anymore, I flipped it out onto a piece of wax paper. 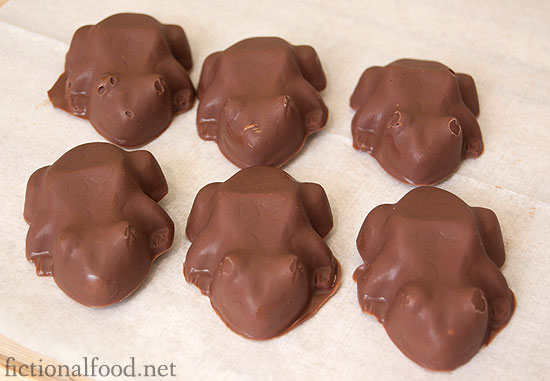 Aside from my sucky ability to fill frog eyes with chocolate, don’t they look great!? You can even see the spots on their back. So cute! I needed to make a box though, because just this frog doesn’t seem to be enough to make it Harry Potter. 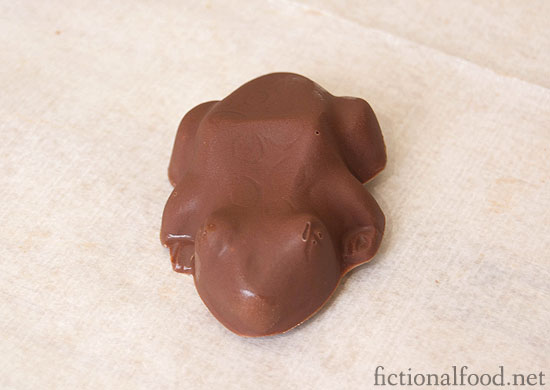 Ribbit! Sadly, I don’t have real “croakoa”, so mine don’t hop around. For the box, I used this image from some genius on Deviantart and printed it on cardstock. Following the directions, I put together a box. 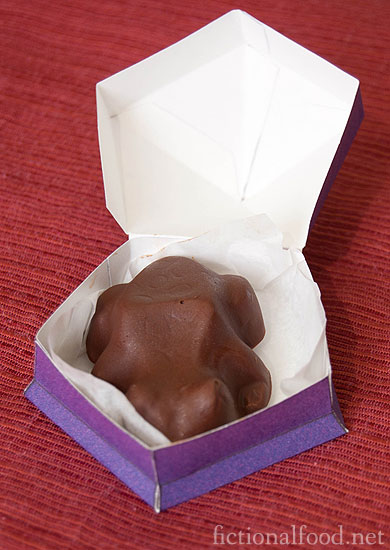 As you can see, this chocolate frog is a little bit too big for the box, but I managed to squeeze him in. If you use this mold and that box sheet, try enlarging it slightly.

I asked my daughter to come be my hand model and she did such a great job. Doesn’t the box look great? I took a bite and gads was it a lot of chocolate! I ate half of one before putting it down and told my daughter she could have the rest for dessert. Of course, she didn’t listen to me and went and grabbed a whole new one. Eventually she came to me with chocolate all over her face and a zombie-like look saying, “This is a loooot of chocolate…”

These boxes were really adorable and not hard to make, so they’d make a great little favor if you throw a Harry Potter themed party. And the best part is, you don’t have to empty out your vault in Gringott’s to make them.

A bag of chips was enough chocolate for me to make approximately 7 frogs because I had enough leftover to make about one more frog after I’d filled up the mold. I recommend buying a couple of molds if you’re going to be making a lot of them!