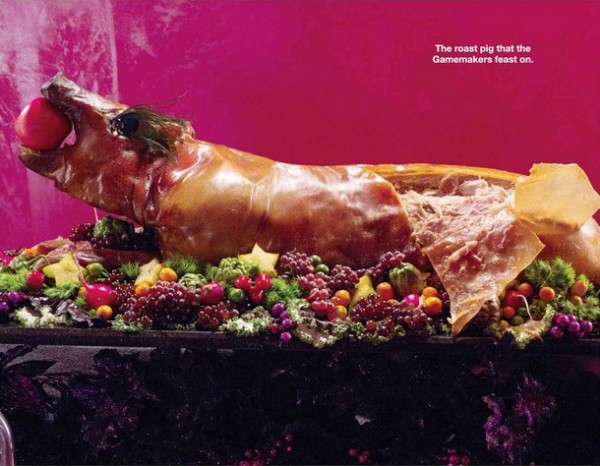 came out and I was really stoked to see that they’d included a whole section of the book about food in the movie. 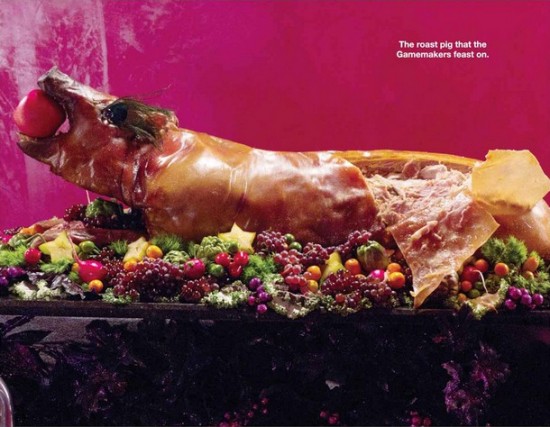 Seriously amazing! I mean, the pig even has fake lashes on! And look at those fruit and veggie garnishes! Beautiful!

You can’t really tell what they’re eating here, but the white roses are most certainly creepy. Katniss looks like she’s eating some kind of custard with fresh fruits, maybe? It’s hard to tell since the image is a bit small. I sure hope we get to see Peeta eating hot chocolate for the first time on the train though!

I was a bit weirded out by some of the other dishes they featured since when reading the books, I always thought that the food was decadent and delicious, but also normal. I never got the impression that the food was as freakish as the citizens. Some of these dishes don’t really make up much of a meal and Katniss never talks about the food being freaky. 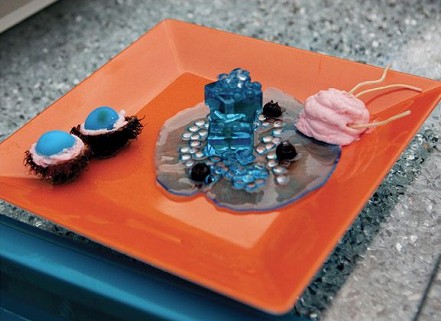 This looks like melted Jell-O with blueberries and those balls from bubble tea dropped in with a funky shaped meringue with tentacles. Then on the side you have what looks like dried out rambutan shells stuffed with more of the meringue and topped with dyed quail eggs. This is like something you’d see on Worst Cooks in America. =\ 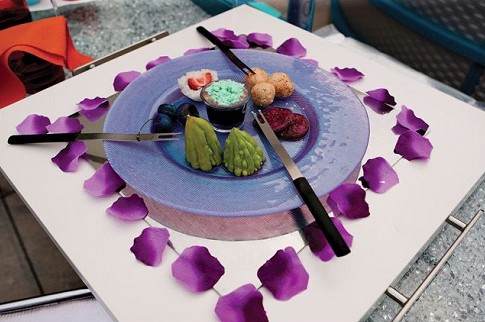 This looks like dark blue cherries (never heard of those!!), a strawberry mochi bitten in half, blue dyed crab salad in the middle, two slices of beets, two raw bittermelon ends (???), and some really unattractive looking… dumplings? I can’t imagine how this fits together to make a meal or an appetizer. Where’s the roast beef, salads, stews, fancy soups, and delicious breakfast buffet Katniss describes?! I hope they just left it out of the companion! Those are some really cool forks though!

I’ll be finding that out for sure real soon, as I’m writing this post from “the Capitol” of our current nation. I am, of course, referring to Hollywood. I’m in town to attend the red carpet premiere of The Hunger Games and I am understandably too excited to think straight. I’ve got some plans for posts when I get back, as I’ve got to document what I’ve been doing during my nights in the hotel room. Should be fun!