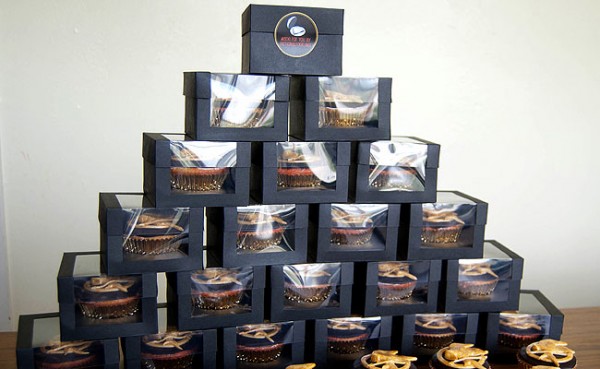 So many people contact me, comment on my YouTube video, or comment on this site asking me if I’d sell them Mockingjay cupcakes. I’ve never really taken it seriously because I live in the middle of the Pacific Ocean, making delivery to the mainland quite expensive since I’d need to overnight them. But then one day I got a request I couldn’t turn down: mockingjay cupcakes to be “parachuted” to journalists to help promote the Facebook game Hunger Games Adventures. 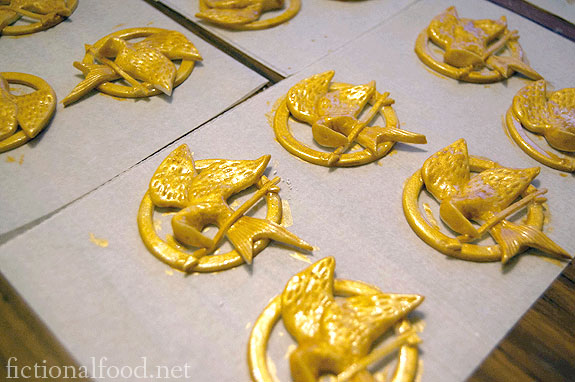 These are the pins as they dried. I started working on them at around 6 PM Monday night, then finished the last weary brush stroke of gold glaze at 6 AM.

It was an extremely stressful ordeal for me because of the boxes. Mr. Pikko (hubby) said that it would look especially great if I were to make the boxes myself, which I agreed with, until my trial run in Los Angeles that revealed it was taking me about 45 minutes to make each box. I decided I should just buy them to bypass 27 hours of work, but when some nightmarish UPS driver threw my box over our front fence, the dog came and had himself a little snack of cupcake boxes.

I filed a claim with UPS that got approved, but then when I wanted a refund because of them not arriving in time and then with the dog, the nightmarish vendor on Amazon, Dress My Cupcake, was only going to issue me a 50% refund because not “all” the boxes were chewed up by my dog. Apparently to them, if your dog opens the package out in the yard, it’s still sanitary and usable. And keep in mind that they were going to be paid twice for the product; once by me and once by UPS. I filed a claim with Amazon on the basis that they were double dipping and that they shipped it out too late and got my money back. 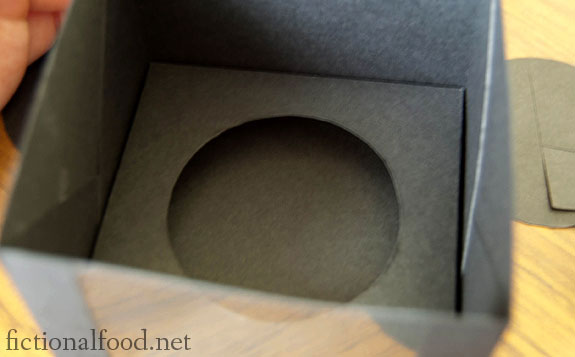 Anyway, here’s a peek at the inside of the box. The design I used was from a scrapbooking blog that gave no template, so I ended up just using the look and making my own template. With templates, the work went a lot faster and I cut the box time in half. I couldn’t find my circle cutter though, so I had to cut all those circles out by hand. 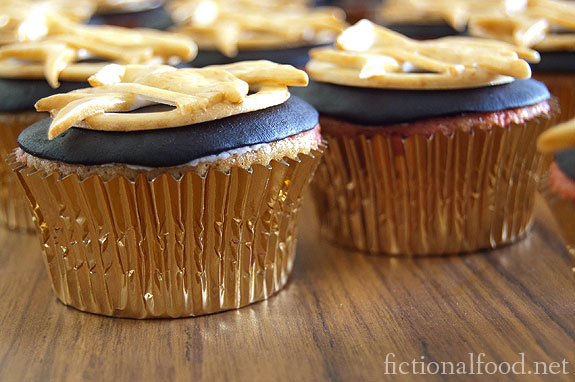 For the original Cupcakes on Fire, I used just plain yellow cupcake cups so that you could see the marbled “fire”, but this time I used pretty gold ones

to match the pin. I also made the pin a lot bigger. 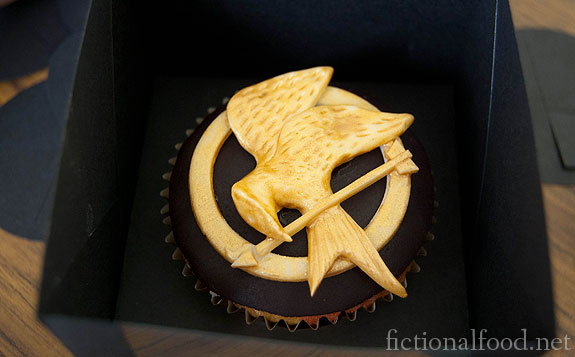 I felt like it looked a lot better taking up the whole cupcake rather than being particular about it being the same size as the replica pin. I also used an X-Acto blade this time to make the details on the tail and wings. 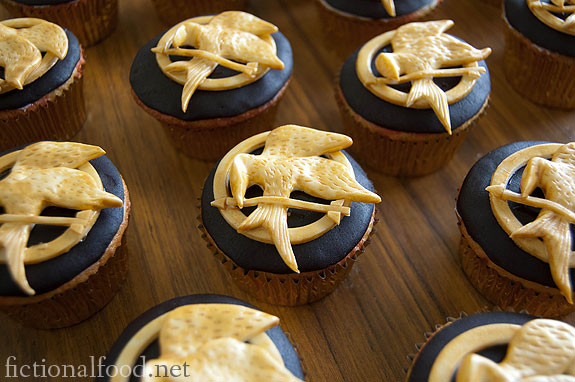 Here’s a further out shot. Once I got the fondant onto the cupcakes, it was quick work to put the pins on, but I still had to work right up to 2 PM before packing it up to rush to FedEx. I’d used a strawberry cupcake recipe from Cupcakes From the Cake Mix Doctor

, which has you add a box of strawberry gelatin, fresh strawberries, and milk to a box mix, but I was rather disappointed in it because all the added liquid made the cupcakes not dome properly. 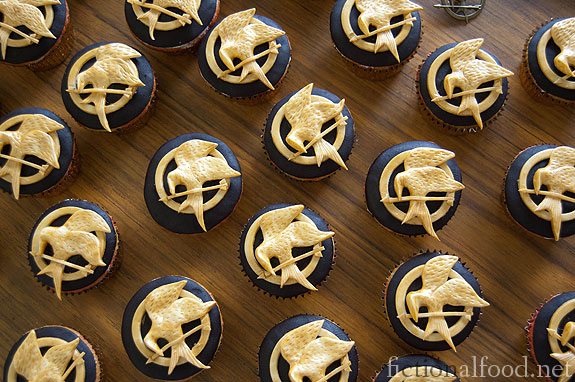 I placed a Fictional Food sticker on the back of the boxes. 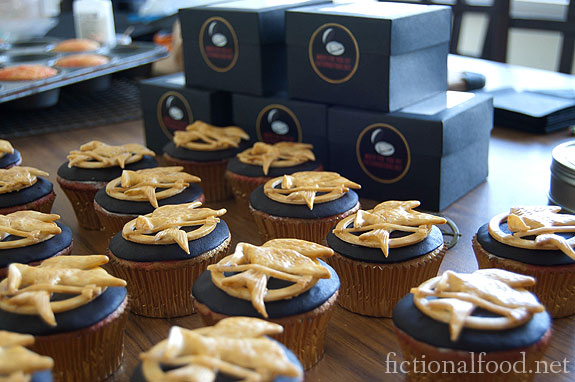 Here’s a wall of the back! 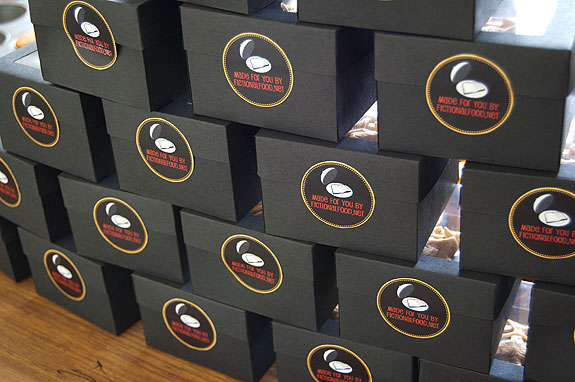 Anyway, I had a stressful time taking these to FedEx. The guy was wheeling his handtruck into the office when I got in sight of the place! Then I get up to the desk and the clerk is like, “You can’t ship in foam coolers anymore.” and she made me buy two 10 dollar boxes to put my coolers in. Argh! Then when she’s boxing one of them up for me, she turns it on its side to tape the bottom. I’d told her there were cupcakes inside, but she didn’t seem to get it. Sigh. 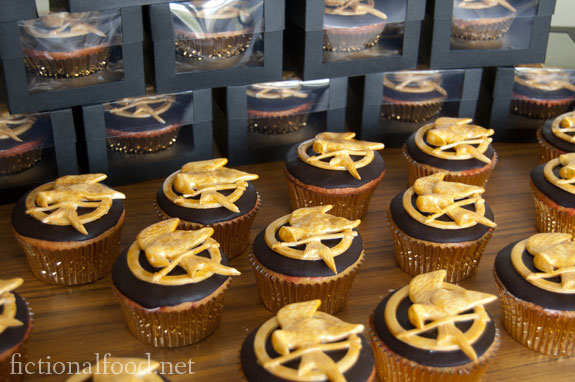 Despite all the stress involved with the boxes, I was happy with the results.

They made it safely to the mainland and so now I’m just waiting around to see who got them. The shipment to New York was the one that got flipped by the clerk and if you ask me, they took a serious beating getting to the media.

So far, I’ve seen tweets about cupcakes that got to:

If you see one somewhere, let me know!