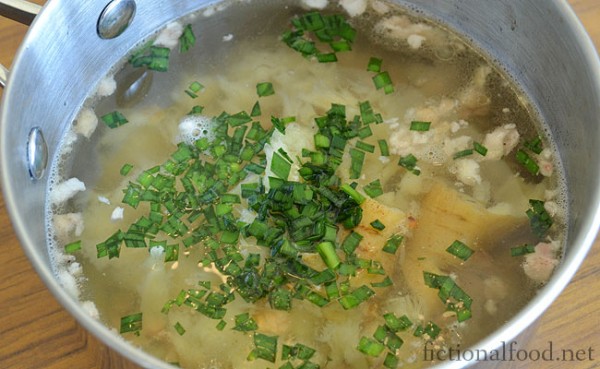 I mince groosling until it’s practically mush and mash some of Rue’s roots. Fortunately, they’ve both been roasted already so they mostly need to be heated up. Already, between the sunlight and the rocks, the water’s warm. I put in the meat and roots, swap in fresh rocks, and go find something green to spice it up a little. Before long, I discover a tuft of chives growing at the base of some rocks. Perfect. I chop them very fine and add them to the pot, switch out the rocks again, put on the lid, and let the whole thing stew.

The Hunger Games by Suzanne Collins

In The Hunger Games, Katniss hunts a bird that she describes as looking like some type of wild turkey that’s “no bigger than a chicken”, which she later cooks for Peeta in a soup heated with hot rocks. She describes it as a bird that has delicious, fatty meat and grease that runs down your chin when you bite into it. Since I don’t have wild turkey on hand, I ended up just using a chicken for this. Katniss roasts it over a small fire she builds shortly after teaming up with Rue.

The soup Katniss makes is tricky to follow because I had to hunt down several references to finally piece together how everything was made before she cooked it.

For instance, the groosling Katniss first eats with Rue isn’t the one she cooks for Peeta. The two of them finish off that bird on their own and then after she blows the pyramid, she kills three more grooslings and overcooks them over another fire. These are the grooslings she ends up feeding to Peeta.

I started off with a pot of water. If you’re wondering why I’m cooking it in a pot, it’s because Katniss does as well. Haymitch sends her broth in a pot and this is the pot that Katniss uses to make the soup. Maybe hers didn’t have a handle and it was made out of iron, but I’m guessing you all can forgive me for that.

The soup is still nice and warm in its iron pot. And actually doesn’t taste too bad. 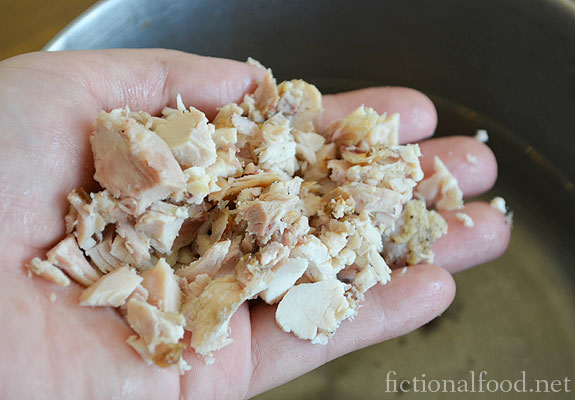 To cook the chicken, I actually just sliced off the wings, drumsticks, breasts, and thighs and roasted the carcass in our Big Green Egg. We were grilling a rabbit anyway, so the rest of the chicken was part of dinner too. I didn’t season the carcass, but the smoke did give it a lot of smoky flavor. I admit I didn’t mince it until it was “practically mush” because I didn’t read close enough. This will have to do! 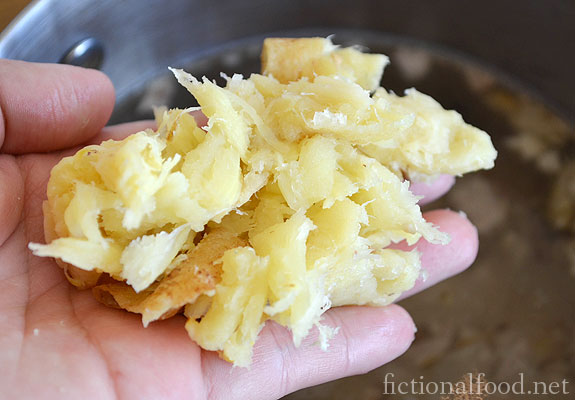 The roots from Rue are described as being a starchy root with “the sharp sweet taste of a parsnip”. I bought parsnips and roasted them by just throwing them on my oven rack and waiting until they were soft enough to mash. 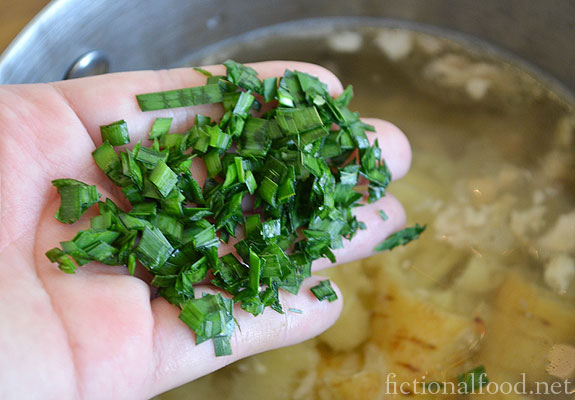 For the chives, Katniss walks around til she finds some chives growing near some rocks. Funnily enough, I have a “tuft of chives” growing by some rocks in my yard. It was almost gone because the grass is taking it over, but I had enough to add to my soup. Now to cook it!

I’m struck by how brutally hot it is. I swear the Gamemakers are progressively ratcheting up the temperature in the daytime and sending it plummeting at night. The heat of the sun-baked stones by the stream gives me an idea though. Maybe I won’t need to light a fire.

I settle down on a big flat rock halfway between the stream and the cave. After purifying half a pot of water, I place it in direct sunlight and add several egg-size hot stones to the water.

The Hunger Games by Suzanne Collins

We were at a store buying feed for our rabbits when I wandered over to a gardening store nearby. As I was walking around I spotted a heavy bag of “smooth river rocks” and figured that would be perfect for cooking a pot of groosling soup.

Since we have a dog and tons of annoying doves outside, I didn’t think it would be very sanitary of me to just leave them in the sun outside. Besides, I don’t have the luxury of Seneca Crane’s controlled sunlight to heat my rocks, so I simply washed them and set them into a cast iron pot on my stove and heated them until they were really hot. I used a spoon to move them to the soup, which I’m not sure Haymitch included, but since it’s probably hard to “sip” from a cast iron pot, I’m assuming she did have one. 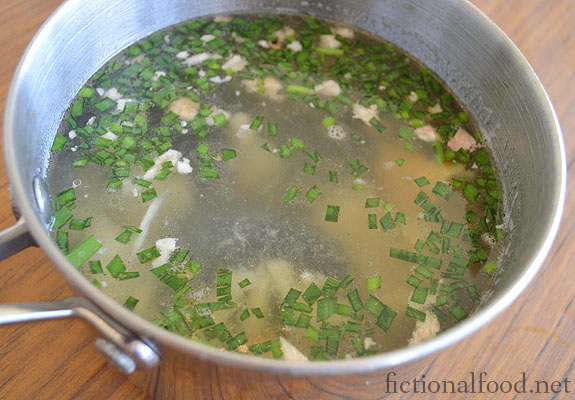 Here’s the soup cooking with the hot rocks I just put in. It’s hard to tell, but the rocks were so hot that the soup was bubbling around the rocks and there was steam coming out of the pot. I ended up switching out the rocks a total of four times, covering the pot each time to let it simmer.

Katniss only does it twice, so I made sure to check the heat after two sets of rocks and it was pretty hot. Not boiling, but still very hot. I switched out the rocks two more times just out of curiosity, as I wanted to know if I could get it boiling, but I ended up losing patience. 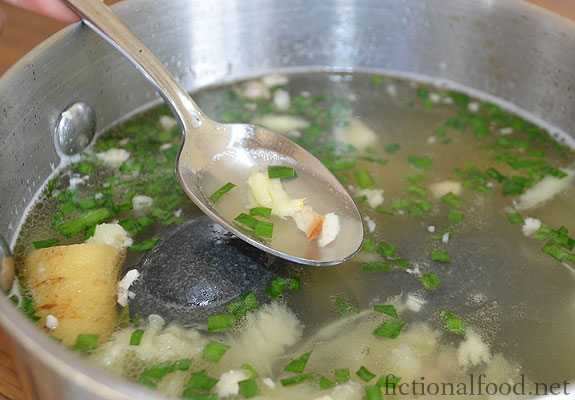 Here’s the soup all done. I thought it would taste more like the smoked meat, but the dominant taste turned out to be the parsnips. So it ended up tasting like smoked parsnip soup. Not something I’d recommend serving at a Hunger Games party, but still good enough where I can see it tasting pretty good when you’re in the woods and starving. Nice job, Chef Katniss! 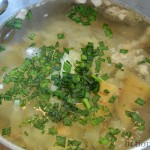 A simple soup of groosling and roots cooked with hot rocks.