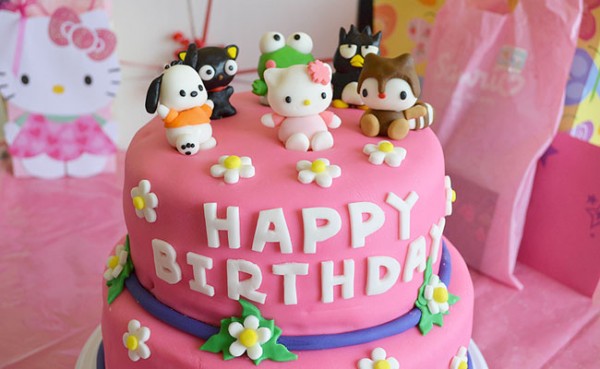 It’s been a while since I posted something, which is sad because I’ve had so much planned and never end up getting around to doing it. Birthday parties for your kids aren’t something you can hide from though.

My daughter has become used to my elaborate cake creations now. So much so that it’s expected it be magnificent. Last year, I nearly killed myself making her a huge pink castle cake. Earlier this year I made a Plants vs. Zombies cake for my son’s party and Angry Birds cupcakes for his class.

Anyway, I didn’t really realize how important the cake had become to her until the night before, when she was being a brat and I threatened to skip the cake and just get her something from Safeway, which caused her to scream, “NOOOOOOOOOOOOOO……..” Luke Skywalker style. I also found her little party schedule on her whiteboard, which included the event, “Make sure Mommy is working on cake” on party day. Aww!

This year, she asked for Sanrio, so I planned out a big three tier cake with a dozen characters that never made it to cake form, but that’s fine because I’ve learned that the hardest part about these kinds of special cakes is that it’s the cake itself that requires the most legwork, not the characters themselves. 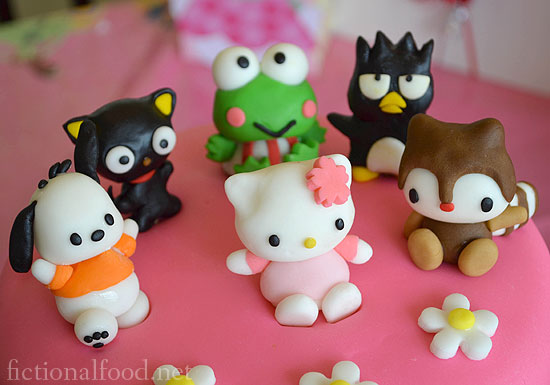 I ended up making a total of six characters: Chococat, Kero Kero Keroppi, Bad Badtz Maru, Pochacco, Hello Kitty, and Landry. I had to skip whiskers because my black fondant is way too soft to make into whiskers unless I plan ahead and leave it out to dry for at least a day in a thin strip. 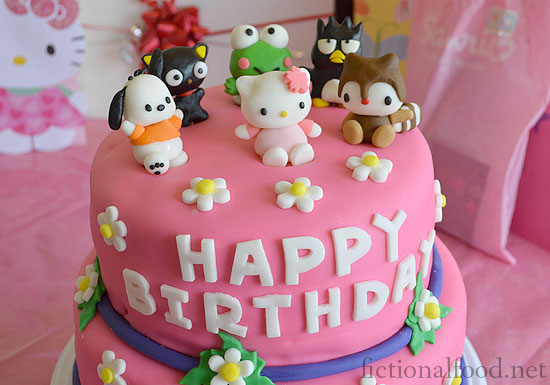 I suck at fondant covering, but this one wasn’t as bad as my usual attempts. My strips for the Hunger Games cake were awful, so I just went with a rolled purple strip. Nice and easy! I put flowers and leaves on the parts where they were cut. 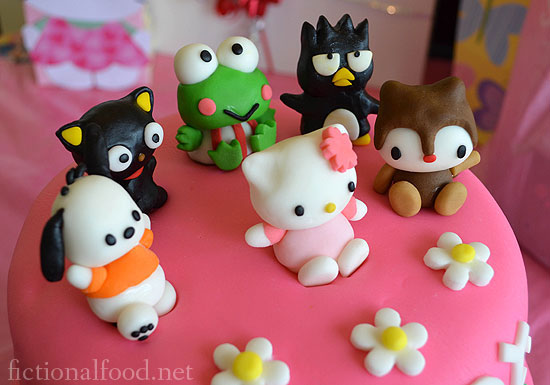 Here’s a better angle so you can see Keroppi a bit more. I was happiest with Landry and Keroppi. 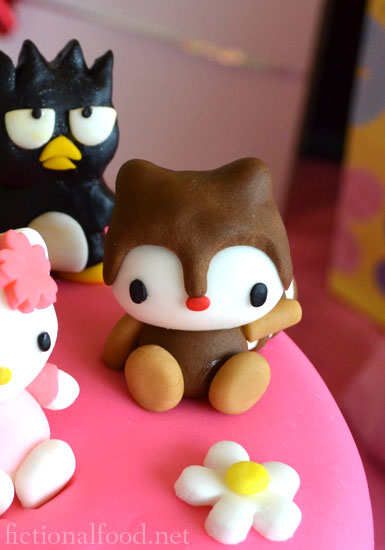 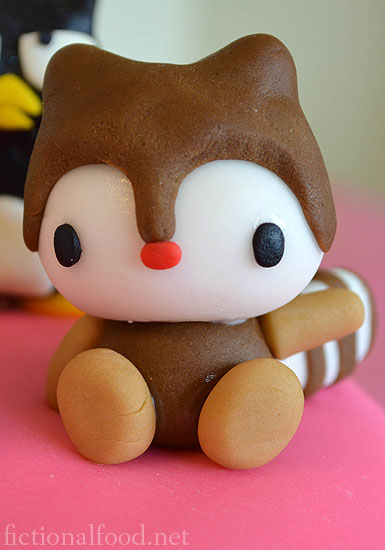 A closer shot with his tail more visible! 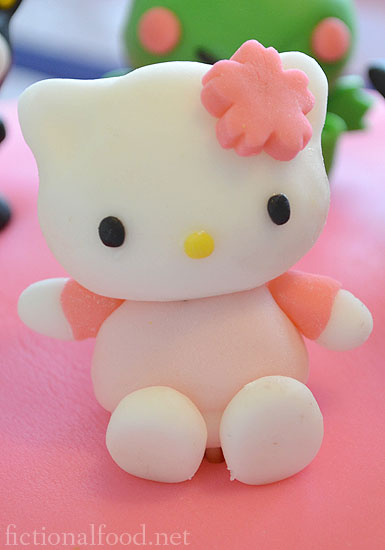 Here’s Hello Kitty. I initially made her stand up, but she looked cuter sitting. She’s got flecks of brown and black on her foot because I moved Chococat over to the cake and forgot to wash the black color on my hands off first. 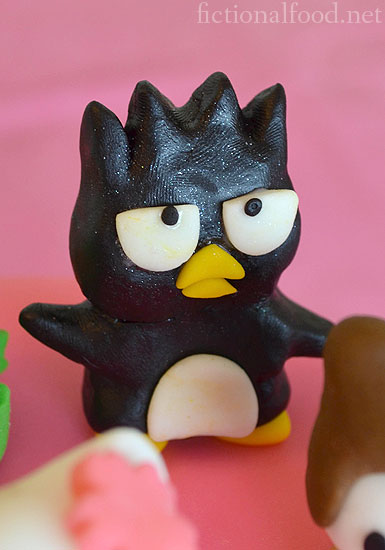 If you’re wondering why there’s silver glitter on his head, it’s because he had some powdered sugar on his eyes, so I took my brush and flecked it off, not realizing that the last time I’d used that brush was to dust something with silver edible glitter. He’s not so happy about it. 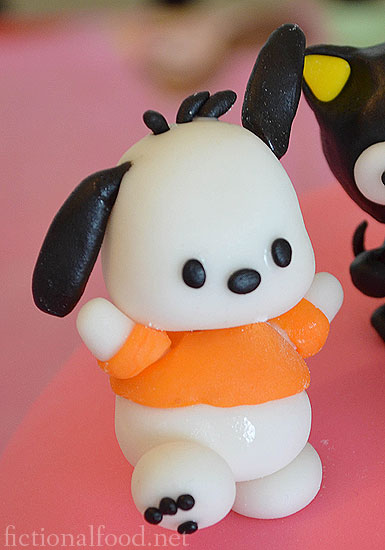 Here’s Pochacco, who was one of my all time favorite characters as a teenager. His foot kept falling down, argh! 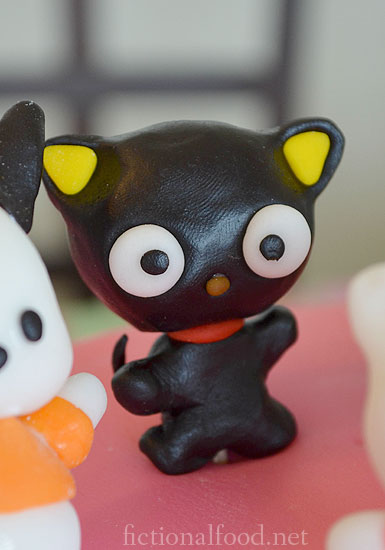 Here’s Chococat! I was so annoyed that the black kept showing my fingerprints! 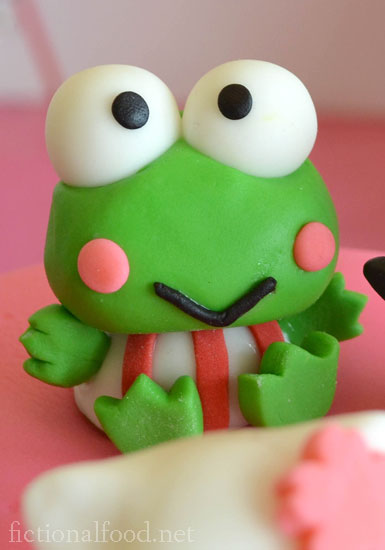 And last of all, here’s Keroppi, my favorite! I was sad I messed up his right hand. *sob*

The second after she blew out her candles, the kitchen was full of kids screaming which character they wanted and whether they wanted the head or the body. It never ceases to amaze me how eager they are to eat them and how fast they disappear. If it had been up to me I would have saved them all and kept them in my cupboards forever! Hahaha!

I stressed out and I’m exhausted, but the party was a success and she loved it which is, of course, the main thing.