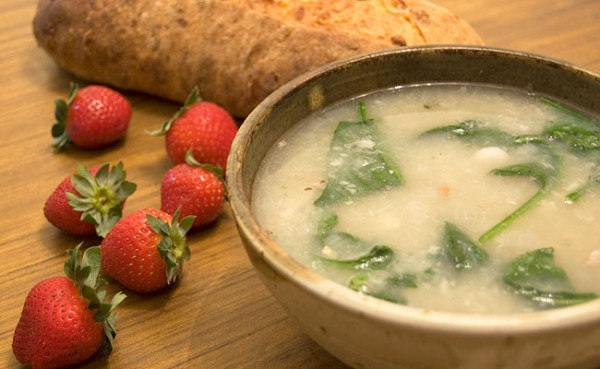 “The fish and greens are already cooking in a stew, but that will be for supper. We decide to save the strawberries and bakery bread for this evening’s meal, to make it special we say.”

In this scene from The Hunger Games

, Katniss has just finished preparing herself for the Reaping and they’ve begun cooking their supper from the items Katniss brought home from a day of hunting, fishing, foraging, and trading.

In all my researching about fish stew, pretty much every one that I saw was a red stew, which really annoyed me because the fish stew I was imagining was white. Which meant I had to do that awful thing called “winging it” and just come up with my own recipe. Funnily enough, the fish and greens were no problem for me to get. My husband raises tilapia right under our front doorstep and his spinach plants had just enough leaves for me to snip for this dish. Unfortunately, he doesn’t raise any old type of tilapia. 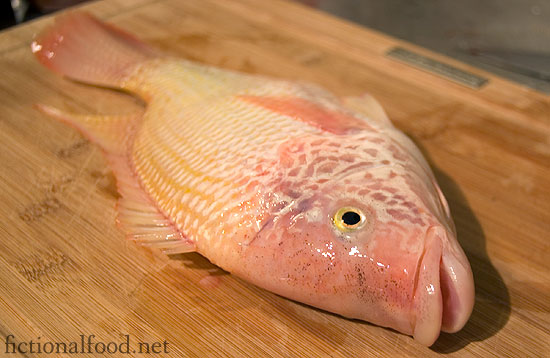 I am so not kidding. I scaled him and his mouth kept opening and closing like he was trying to tell me something. I cut off his head and gutted him and his tail kept flapping up and slapping my arm. I’m filleting him and the meat is twitching in my hand. Ugh. I love eating fish but zombie fish are so hard to deal with. I have to find out from my cousin if she’ll teach me Killing Fish Dead 101. I’m sure the neighbors are sick of hearing me shriek in the kitchen whenever I’m cleaning one of these. 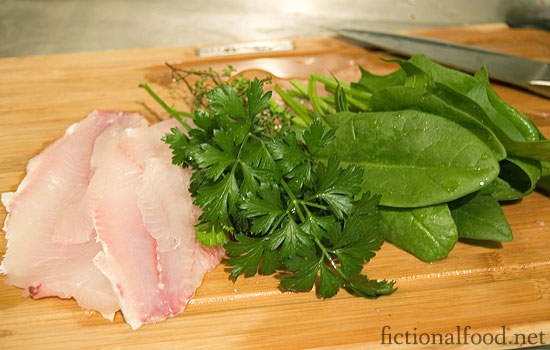 Here’s my ingredients. I tried to stick with things that Katniss could harvest or grow herself. The herbs are parsley and thyme from our garden and then the spinach leaves, which I didn’t add until I was finished cooking. I tried to grow wild strawberries, really, I did. I have been growing them for 9 months now and I’ve only gotten one tiny strawberry. I ended up just buying organic ones at Safeway along with a loaf of artisan bread. Katniss trades for her bread anyway, so I felt this was still fitting.

I started by boiling the bones and head in water in a cast iron pot to make fish broth. I added two cloves of garlic cut in half and two slices worth of onion, which looked goofy while cooking, but disintegrated to where you couldn’t see the hoops. Not wanting to waste any of the meat attached to the bones, I began just picking the bones out one by one, letting the little flecks of meat stay in the broth. After skimming all the foamy gunk out of the pot from time to time, I added the thyme and parsley, then I seasoned it with salt, which Katniss trades for at the Hob that morning.

Since the only grain they have is ration grain, I went with the assumption that the Everdeens don’t have flour or cornstarch to thicken their stew, so I looked online and saw that you can grate potato into a soup to thicken it up. Since Katniss says that the katniss root is ‘as good as any potato’, I substituted with potato. I’m trying to grow some katniss, but I’m pretty sure the birds are eating my seeds.

Anyway, I grated about half of a russet potato into the soup and let it simmer. It worked! The potato cooked down to nothing and I was left with a lightly thickened broth. Lastly, I stirred in the spinach leaves. 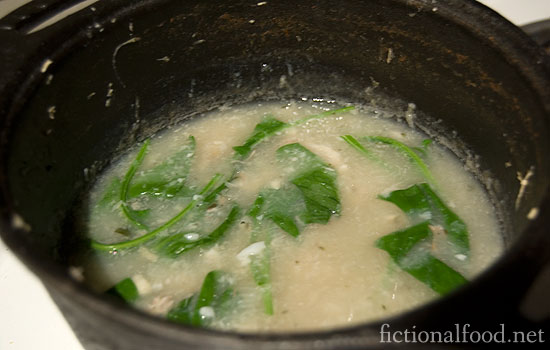 Cook a gentle green like this for too long and you wind up with really sickly looking greens in your meal. Since Katniss says the fish and greens are cooking, I’m guessing she used a hardier green, perhaps like collards or kale. I have kale in the back yard, but it’s so full of aphids I didn’t feel like spending two hours picking them all off. 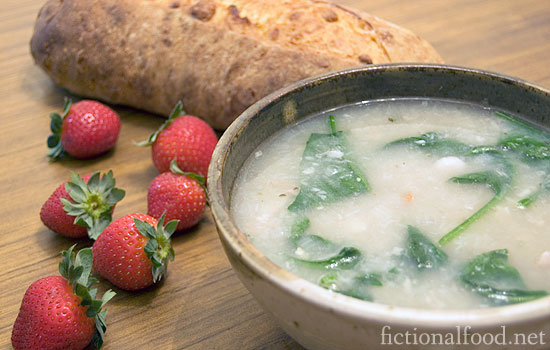 Here’s the final photo again. Later, when Katniss is on the train to the Capitol, she thinks about this meal again, trying to imagine if it went uneaten by Prim and her mother.

“In the distance, I see the lights of another district. 7? 10? I don’t know. I think about the people in their houses, settling in for bed. I imagine my home, with its shutters drawn tight. What are they doing now, my mother and Prim? Were they able to eat supper? The fish stew and the strawberries? Or did it lie untouched on their plates? Did they watch the recap of the day’s events on the battered old TV that sits on the table against the wall? Surely, there were more tears. Is my mother holding up, being strong for Prim? Or has she already started to slip away, leaving the weight of the world on my sister’s fragile shoulders?”

The complete and utter sadness of this meal aside, I am definitely happy with how it tastes. While I can imagine Prim and her mother being unable to eat, I can’t see it going completely to waste and I assume this gets eaten eventually. I had to keep it extremely simple while still making it warm and hearty and I think I accomplished that. In closing, I almost set fire to the kitchen, real or not real?

No seriously, I smelled something burning and turned and saw that I’d left my oven mitt on the cast iron pot and it had already turned part of the mitt brown. I know, facepalm. Luckily I saw it though. A flaming stew is not what I had in mind! 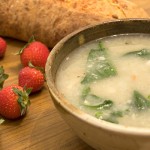 Before the Everdeens head to the Reaping that will change their lives forever, they leave a fish stew with greens simmering for their supper.