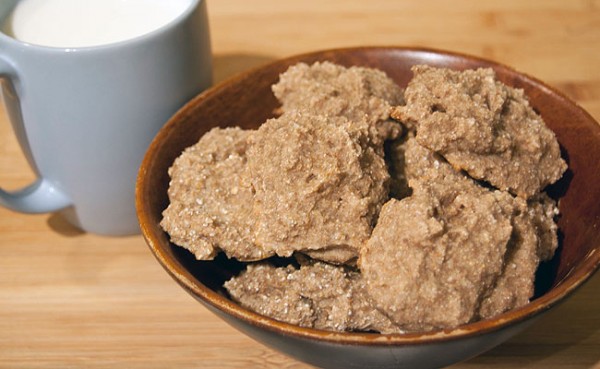 When I did the District 11 bread, I went with whole wheat flour, assuming that by “dark” ration grain, Suzanne Collins simply meant wheat. However, since the Capitol would have all the frilly luxuries including things like fluffy dinner rolls and white bread, I started thinking that maybe wheat would be grown exclusively for the upper class while “ration grain” was a cheaper grain given to the lower class. I started looking at different grains, trying to find ones that were particularly dark.

The first that came to mind was rye because it’s a dark colored bread. It was difficult to research because there are different kinds of rye, each having varying degrees of dark color. I did find it interesting that rye can be grown in much poorer soil conditions, which could possibly be a factor when you consider that Panem had to rise out of the “end of the world”. Wheat could have been re-introduced to agriculture as time went by, but with rye remaining as the lower class grain used for rations and tesserae.

so that I could do this totally from scratch. I figure that either the Everdeens have their own grain mill or there’s a miller than will mill their grain for them for a fee. Either way, I wanted to have totally unprocessed rye flour to work with. I went to Down to Earth and bought organic rye berries. A decently sized sack was a $1.39, the price per pound being $0.99. 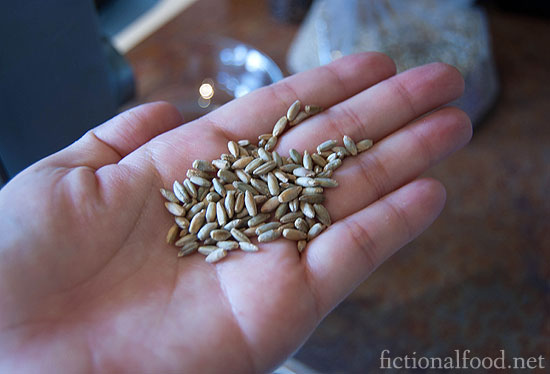 As you can see, they’re a dark grain! I put them in my spiffy new mill and started cranking. Boy, did I get a workout! 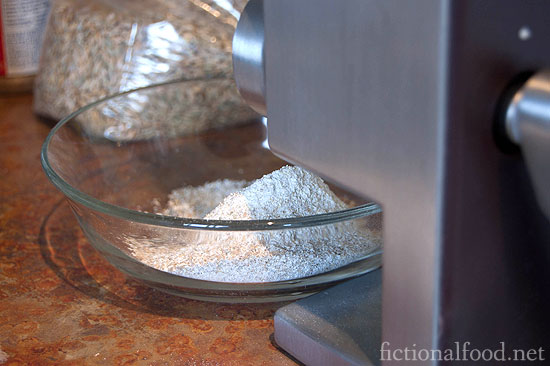 I’m not kidding, I was really working up a sweat doing this! Eventually, my daughter came to see what I was doing and then she had to give it a try and so I was relieved of milling duties. I’d already ground about a cup of flour, so I experimented with that first cup.

“Look what I shot.” Gale holds up a loaf of bread with an arrow stuck in it, and I laugh. It’s real bakery bread, not the flat, dense loaves we make from our grain rations. I take it in my hands, pull out the arrow, and hold the puncture in the crust to my nose, inhaling the fragrance that makes my mouth flood with saliva. Fine bread like this is for special occasions.

Flour was already taken care of. Goat milk would be from Lady. Because Katniss refers to these biscuits as flat and dense, baking powder and baking soda were out. They trade at The Hob for salt. Even though you can make butter from goat milk, I would think that’s too much of a luxury item for the Everdeens, so that was out as well. Katniss refers to sugar as a “delicacy”, so that’s definitely out.

The last tribute alive receives a life of ease back home, and their district will be showered with prizes, largely consisting of food. All year, the Capitol will show the winning district gifts of grain and oil and even delicacies like sugar while the rest of us battle starvation.

This left me with flour, milk, and salt. With so little to work with, I expected them to be practically inedible. 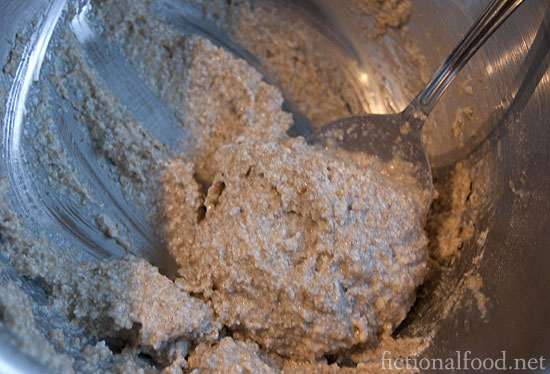 Here’s the dough after I mixed the three ingredients. Not much to it at all! I heated my oven to 425 degrees and then simply dropped spoonfuls of the dough into my cast iron pan. 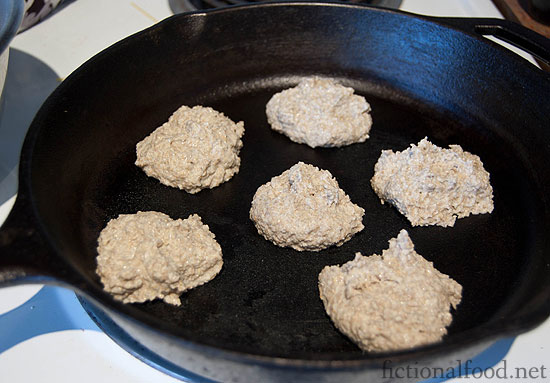 I baked them for 15 minutes, until they were cooked through. They darkened up quite a bit while baking. If you’re wondering why I went for such ugly looking things, it’s because of how Katniss describes it in the book:

The fish-shaped loaf tinted green with seaweed from District 4. The crescent moon roll dotted with seeds from District 11. Somehow, although it’s made from the same stuff, it looks a lot more appetizing than the ugly drop biscuits that are the standard fare at home.

In the end, they turned out exactly how I wanted them to, so I was very happy! Here they are with a cup of goat milk, which is the meal that the Everdeens eat before heading to the Reaping.

We decide to save the strawberries and bakery bread for this evening’s meal, to make it special we say. Instead we drink milk from Prim’s goat, Lady, and eat the rough bread made from the tessera grain, although no one has much appetite anyway. 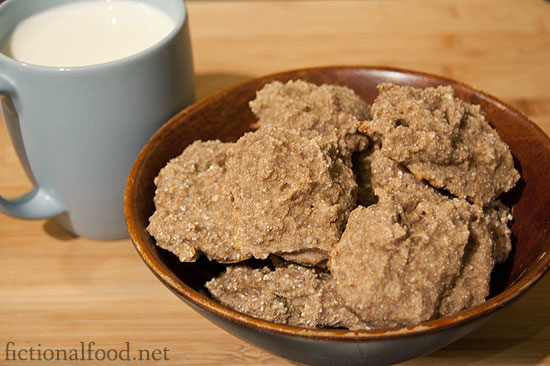 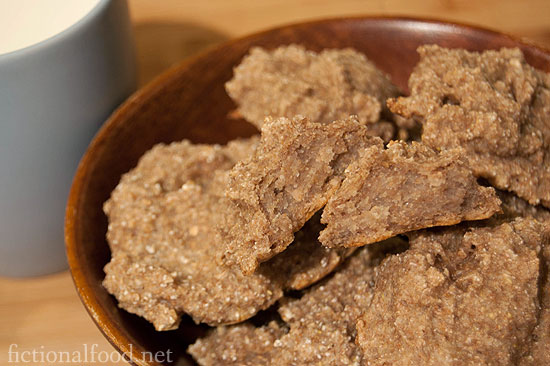 I had one and they are indeed very dense, but I was surprised that it wasn’t as nasty as I was expecting. My daughter, on the other hand, had an entirely different opinion. I tried to explain to her the concept of what I was doing and she spit it out, declaring that she couldn’t believe people would eat stuff like that. She’s a Capitol girl, for sure.

But for District 12, where any food is good food, I didn’t think they were all that bad. You won’t win any culinary awards for these, but they’d certainly make for great realism at a Hunger Games party.