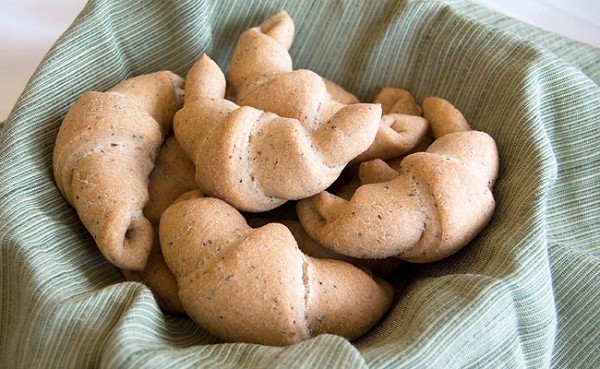 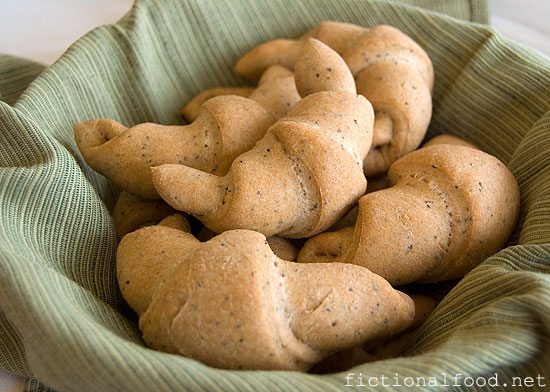 I open the parachute and find a small loaf of bread. It’s not the fine white Capitol stuff. It’s made of dark ration grain and shaped in a crescent. Sprinkled with seeds. I flashback to Peeta’s lesson on the various district breads in the Training Center. This bread came from District 11. I cautiously lift the still warm loaf. What must it have cost the people of District 11 who can’t even feed themselves? How many would’ve had to do without to scrape up a coin to put in the collection for this one loaf? It had been meant for Rue, surely. But instead of pulling the gift when she died, they’d authorized Haymitch to give it to me. As a thank-you? Or because, like me, they don’t like to let debts go unpaid? For whatever reason, this is a first. A district gift to a tribute who’s not your own.

Tonight, all I can do is strap myself in and take tiny bites of the bread. It’s good. It tastes of home.

Food plays a huge part in The Hunger Games

and one of the most memorable pieces of food from the first book is the gift of a small loaf of bread to Katniss from District 11. I might have made these incorrectly, putting the seeds inside the roll rather than on the outside and I’m still not sure if I should have used poppy seeds or sesame seeds, but since poppy seeds are a lot more visible, I went with that.

on Amazon than it is at a store. One little McComick bottle was a whopping $7.99 at my local market, while I was able to buy 32 ounces of the stuff for just 11 dollars online. The first time the District 11 bread is mentioned is when Peeta is telling Katniss which ones they come from and the dark brown crescents are “dotted with seeds”. Now that I look back, this does sound like it’s on the outside. Oh well!

I started wondering how Peeta would know how to bake breads from all the districts and eventually decided that the Mellark bakery probably has to know how to make them all for victory tours, so that they can provide bread from the winning district when they get to District 12.

I adapted a recipe I found here, adding in 1 tbsp of poppy seeds and doubling the honey because I thought it wasn’t enough sweetness. Boy was I right. This bread tastes incredibly plain. That being said, I guess it makes it more realistic that way. I can’t imagine the people of District 11 having a lot of honey or sugar around to make their bread taste awesome. But if you want to make it look like District 11 bread and still taste good, it’s probably a good idea to add a half a cup of sugar to the dough. 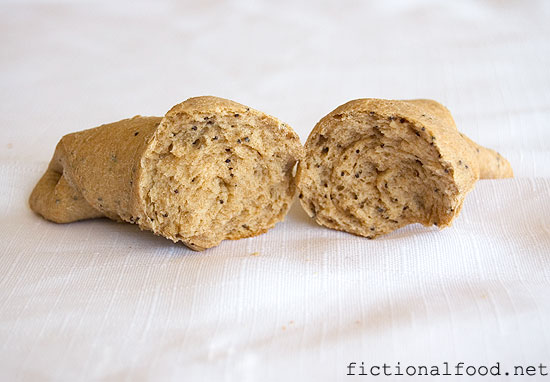 Here’s what the bread looks like on the inside. I’d made one batch according to the recipe, cutting it into 16 wedges, but these were way too small. My second batch was cut into 8 wedges and these made a lot more sense, so that’s what I photographed. I also did not butter them, as butter was probably too great a luxury in Panem. Let me know what you think! Should I bake them again, but with the seeds on the outside or do these look fine as-is?